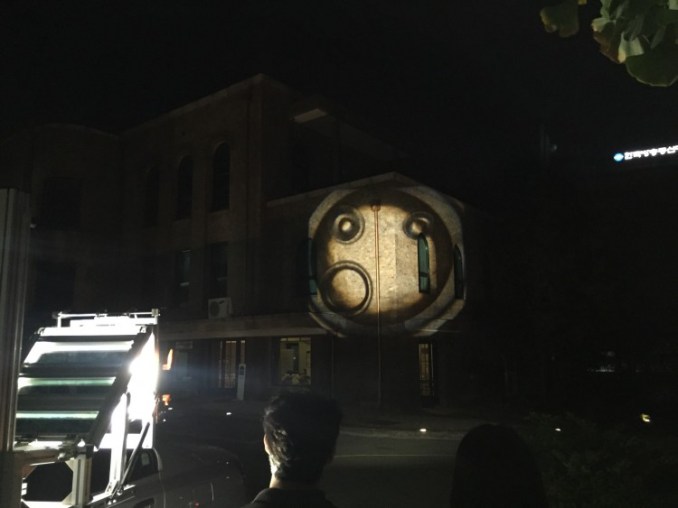 It is not an easy matter that technology and art meet together but it is very meaningful. In response to the request of an external entity , we supported technical advise and supplied Fresnel lens to the work of art below mentioned.

It is to project diversified images of patterns on the external wall of  building using Overhead Projector.  What is peculiar is that we made the apparatus  very simple and open type as shown in the pictures, to make the audience participate directly. It can be called as a kind of “participatory media façade”.

The picture blow is the one demonstrated in the Marronnier Square of University Street; they are the pictures taken at the late afternoon and also taken at night time, and were shown to make beads of water formed on the Fresnel lens using the external wall of building as the screen .

The below is the one projected at the rooftop of a building, very impressive as  the hand of audience is displayed on the screen.

The last one is the one projected the colored image.

As the writer wanted audiences’ interactive participation and the use in the environment of diversified luminance, we recommended apparatus constituent with 2 Fresnel lenses and front surface mirror. First, we made a worktable with 300*300mm  Fresnel lens to make audience conduct directly a various choreography, and second, we increased the brightness of screen using fron  surface mirror and 300*300mm Fresnel lens as  projection lenses instead of projection lens with smaller diameter. If you want our explanation in detail about the work and demonstration, we will ask the artist and help you to communicate with him.